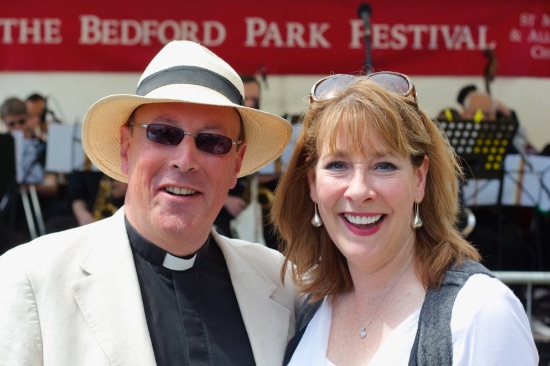 An Evening At Home with Phyllis Logan**

** Previously £18 - Seats in the theatre are now SOLD OUT but we will be live-streaming the event for £12. See below.

Please ignore the Book Now button - you may buy tickets on the link below.

From the 'upstairs' Lady Jane Felsham in Lovejoy to the 'downstairs' Mrs Hughes in Downton Abbey, Chiswick’s Phyllis Logan (pictured with Fr Kevin Morris after opening the Bedford Park Festival) has long been one of our best-loved actresses. She won the Evening Standard Best Actress award in 1983 and the BAFTA award for Most Promising Newcomer in 1984, before starring with Ian McShane in almost 50 episodes of the hit BBC comedy drama Lovejoy.

After dozens more screen and stage appearances, Phyllis was cast as the housekeeper Mrs Hughes in ITV’s Downton Abbey, never thinking it would become a long-running global hit.  As production of the second Downton Abbey film gets underway, Phyllis talks about her remarkable life and career (and love of Chiswick) with Chiswick Playhouse executive director Mark Perry. Phyllis is a patron of the Playhouse.

Read an interview with Phyllis Logan, discussing the new Downton Abbey film (and its other Chiswick actors and director), on The Chiswick Calendar website.

Seats in the theatre are now SOLD OUT but Chiswickbuzz will be live-streaming the event for £12, kindly sponsored by Belinda Norcliffe Casting and The Chiswick Cinema. Click here to book. (Please note: if you have bought tickets from Live.Chiswickbuzz.net before, you may need to log in from an 'incognito' window on a browser such as Chrome - see the Help page here.)