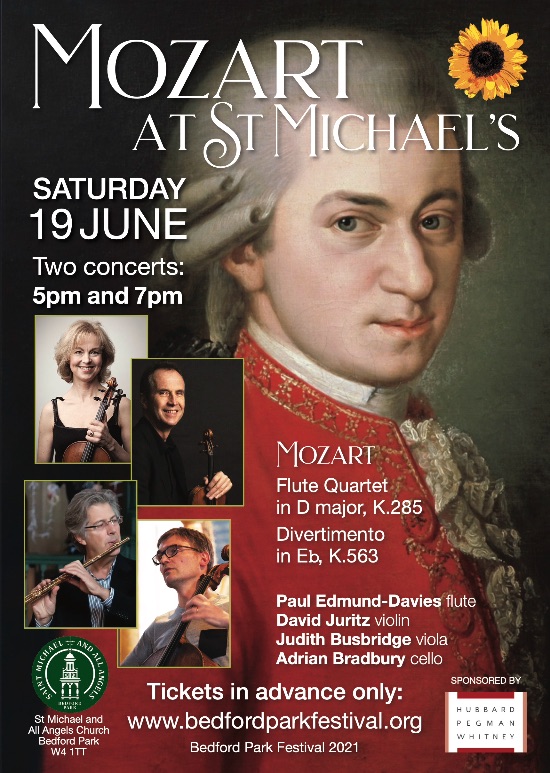 Paul Edmund-Davies has an international reputation as a flautist and soloist and was Principal Flute of the London Symphony Orchestra for 20 years. For five years he held the same position in the PhilharmoniaOrchestra, completing his orchestral life with two-and-a-half years at English National Opera.

In addition, he has written a flute technique book, The28 Day Warm Up Book, edited flute music for Kevin Mayhew Ltd, made many CDs and now regularly gives classes and recitals in Japan, the USA, China, Canada, Europe and the UAE. In the summer of 2014, as a flute soloist, he directed a choir and orchestra to an audience of over 40,000 in South Korea.

David Juritz studied at the Royal College of Music with Hugh Bean and Jaroslav Vanecek where he won all the college’s major prizes for violin including the Tagore Gold Medal.

From 1991 to 2010 he was leader of the London Mozart Players. He made many solo appearances with the LMP, including his debut at the 2006 BBC Promenade Concerts.

He has appeared as soloist and director with orchestras around the world including the English Chamber Orchestra Royal Philharmonic Concert Orchestra and Zurich Chamber Orchestra. His recording of the Vivaldi Four Seasons with the LMP is regarded as one of the finest interpretations of that much-recorded work. Other recordings include Bach’s Sonatas and Partitas for Violin Solo and his own transcription of Bach’s Goldberg Variations, which was released in April, 2021. He also regularly plays on soundtracks for film and television programmes such as Downton Abbey, Call the Midwife and Endeavour.

In 2007 he busked around the world for charity. Starting with an empty wallet he supported his 60,000 mile journey through 50 cities on six continents by playing Bach on the streets. He went on to raise over £400,000 to support life-changing music projects for disadvantaged children in developing countries.

He is the Artistic Director of the Burton Bradstock Festival and violinist of the London Tango Quintet with guitarist Craig Ogden, accordionist Milos Milivojevic, pianist David Gordon and the bass player, Richard Pryce. In 2018, together with his regular duo partner, pianist Sarah Beth Briggs and cellist/conductor, Ken Woods, he formed the Briggs Trio. Their debut recording of trios by Gal and Shostakovich received glowing reviews on both sides of the Atlantic.

David plays on a violin made by J.B. Guadagnini in Piacenza in 1748.

Judith Busbridge graduated in Music from Birmingham University and completed her viola studies with Thomas Rieblin Salzburg, where she was solo violist in the Camerata Academica under the directorship of Sándor Végh, a post she held for 5 years.

She is principal viola of the London Mozart Players and was, until 2011, a founder member of the multi-award-winning Dante String Quartet, with whom she performed at major concert halls and festivals throughout the UK and Europe, winning the prestigious Royal Philharmonic Society Award for Chamber Music in 2007.

From 2010-13 she was violist with Ensemble 360, a versatile group of eleven musicians of international standing who enjoy a residency in Sheffield with Music in the Round, and with whom she again won the RPS Award for chamber music in 2013.

Since September 2013 she is also one of the principal violas with the Orchestra of the Royal Opera House, Covent Garden.

Adrian Bradbury was principal cello in the National Youth Orchestra of Great Britain before winning scholarships to Churchill College, Cambridge (where he read Veterinary Science and Music) and then to the Royal Academy of Music. After further study in Berlin he developed an international career in chamber music as the cellist in Composers Ensemble (winners of the Royal Philharmonic Society Chamber Award, 2002), Jane’s Minstrels, Trio Gemelli, Touchwood Piano Quartet and Chamber Domaine, giving world premieres of solos, duos, trios and quartets by Thomas Adès, Judith Bingham, Tansy Davies, Dai Fujikura, Hugh Wood and John Woolrich.

His research into ensemble synchronisation, in collaboration with Professor Alan Wing, was published by the Royal Society and led to invitations to curate the ‘Music and Brain’ series at the 2010 Aldeburgh Festival and to appear as speaker on BBC Radio 4’s ‘PM’ and ‘Today’ programmes and as soloist on BBC Radio 3’s 2015 ‘Why Music?’ weekend.

His blog, collates scientific papers on music and science.

Together with pianist Oliver Davies, Adrian recorded the complete operatic fantasies of the 19thcentury cello virtuoso Alfredo Piatti on the Meridian label, a 2 CD project released on 1 July 2020.