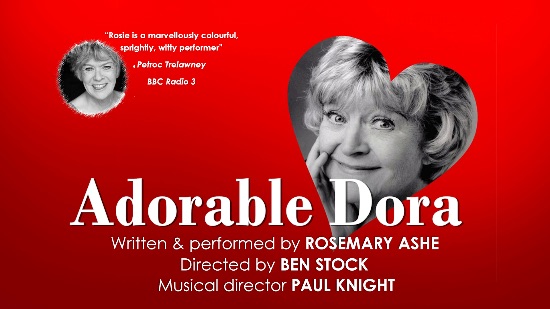 West End diva Rosemary Ashe pays tribute to national treasure Dora Bryan, whose showbiz career spanned eight decades! From pantomime to Shakespeare, Carry On films to a BAFTA winning role in A Taste of Honey, she did it all. As well as making millions laugh in sitcoms including Dinner Ladies, AbFab and Last of The Summer Wine, Dora lived a rollercoaster personal life. Expect fun, music & laughter with excerpts from Dora’s best known shows!

Rosemary Ashe has appeared in many West End productions including: Carlotta, the Prima Donna in the original cast of Andrew Lloyd Webber’s ‘The Phantom of The Opera’, Madame Thenardier in ‘Les Miserables’, Cunegonde in ‘Candide’, Widow Corney in ‘Oliver!’, Hortense in ‘The Boyfriend’, Forbidden Broadway,Felicia Gabriel in ‘The Witches of Eastwick’ (for which she was nominated for a Laurence Olivier Award for Best Supporting Performance in a Musical), Miss Andrew, the nasty nanny in ‘Mary Poppins’, Lottie Grady in ‘When We Are Married’  & Grandma Mole in ‘The Secret Diary of Adrian Mole Aged 13 & ¾’.

Television & radio appearances include: Doctors, An Audience With Ronnie Corbett, The House of Eliott, Cosi Fan Tutte, The Beggar’s Opera & Friday Night is Music Night, Songs From the Shows & In Tune.

Rosie can be heard on many cast albums including: The Phantom of the Opera, Kismet, The Boyfriend, The Witches of Eastwick, Oliver! The 10th anniversary concert of Les Miserables & Mary Poppins.